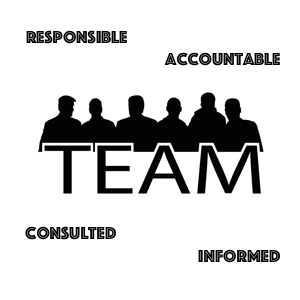 Delegation is an essential part of a project manager's role, so identifying roles and responsibilities early in a project is important. Applying the RACI model can help. As the project manager, it is important that you set the expectations of people involved in your project from the outset.

Projects require many people's involvement, but how do you avoid a situation where people are struggling against one another to do a task. Equally difficult is dealing with a situation where nobody will take ownership and make a decision. How do people know their level of responsibility; when they should involve you their project manager, or when they should exercise their personal judgment?

Without clearly defined roles and responsibilities, it is easy for projects to run into trouble. When people know what management expect of them, it is easier for them to complete their work on time, within budget and to the right level of quality.

A RACI matrix supports the model and is used to discuss, agree and communicate roles and responsibilities.

A variation of RACI used by the Project Management Institute (PMI) is RSI, responsible, sponsor and informed.

Authority Earned, Not Given