Scrum vs. Waterfall Round 2: The Fight Continues 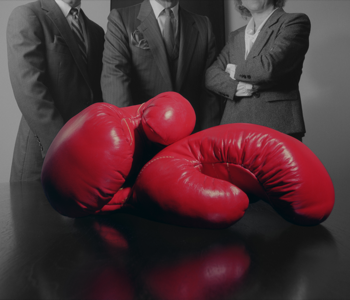 Last month we began our "fight" by exploring two estimating techniques that are often used on both Scrum and Waterfall projects. The first was relative sizing (one kind of analogous estimating) and the second Delphi (called Planning Poker in Scrum). Scrum won both rounds (barely) because, although both techniques can be used on both types of projects, their usage in Scrum seems easier to understand, learn, and apply. I don't know about you, but when I hear the terms Analogous and Delphi I think academics and hard work. When I hear about tee-shirt sizes and planning poker, I think fun.

This month, inspired by a debate on Agile vs. Waterfall, presented by the Phoenix chapter of IIBA, I want to compare Waterfall to Scrum in a variety of different ways. As I listened to the two sides during the debate, I was amazed at the number of the similarities, as well as the importance of the subtle differences. This month's blog will explore both the similarities and differences.

Before I begin, I want to stress the point that neither one is a methodology. Neither is prescriptive. Waterfall is an approach. Scrum is a framework, part of the myriad of Agile methods. Both allow for the use of a variety of techniques. To be effective, both require an appropriate amount of rigour, although we acknowledge that both approaches have been implemented in a wide variety of ways. For the discussion below, we'll assume the appropriate level of rigour for the project at hand.

There are many ways in which these two approaches are similar. Both:

On large, intricate projects with many business and technical interfaces and impacts, with a variety of cross-functional SMEs or with many compliance regulations, there are advantages to the Waterfall approach. While these projects can also be implemented using Scrum, it is harder when there are project dependencies.

Defining Requirements When They Are Highly Volatile

Waterfall projects have approval points, often called toll or stage gates. When requirements are unstable, business analysis can seem to take forever and the sponsor may get frustrated with what appears to be analysis paralysis. I once had a sponsor tell me that he had never seen analysis take so long, but was surprised and delighted that the project get done so quickly once we had the requirements. Thoroughness in requirements definitely paid off. However, there was significant frustration as the churn was happening.

Scrum projects have the wherewithal to handle this kind of churn better in my opinion. User stories that are pretty well understood are closer to the top of the product backlog and are ready for inclusion in upcoming sprint(s) than "epics" that are less understood.

On Waterfall projects, schedule, cost, and scope baselines are established (as well as others). These become project constraints. When changes are approved and prioritised by the Business, the sponsor, often upon the recommendation of the project manager, needs to decide which of the baselines will change. I have talked to many Scrum proponents who argue that Agile projects expect change, but Waterfall projects do not. This assertion is simply not true. I have yet to be on or hear of a Waterfall project that did not expect changes. Having said that, modifying the schedule, particularly when it involves changing dependencies, can be cumbersome and frustrating.

I think managing scope on Scrum projects is easier in many respects, most of which relate to the fact that having small sprints helps the framework accommodate changes with far less pain. In addition, I have seen more consistency in the way changes are requested, approved, and prioritised on Scrum projects.

I could go on with this comparison, but my little blog is turning into a full-fledged article, so I'll simply list out areas where I think Waterfall wins and address them in more detail in future blogs.

Waterfall Wins in These Areas

Of course Scrum wins in some other areas, too.

Elizabeth Larson is Co-Principal and CEO of Watermark Learning and has over 25 years of experience in project management and business analysis. She has presented numerous workshops, seminars, and training classes since 1996 to thousands of participants on 3 different continents.

Elizabeth has co-authored the CBAP® Certification Study Guide (2nd Edition) and Requirements Management, Part I: Requirements Planning. She has also co-authored numerous articles on project management, business analysis, and influencing skills published worldwide. She has co-authored works published in two compilations, Creating a Clear Project Plan, compiled by Dr. Gary Richardson and published by the University of Houston. The other is Projects Without Borders: Gathering Requirements on a Multi-Cultural Project, published by Icfai University Press. She has also been cited in CIO and PM Network, PMI's monthly publication.