The Seven Deadly Sins of Leadership 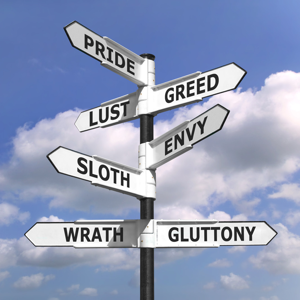 Pride, Envy, Gluttony, Lust, Anger, Greed, Sloth. You either recognise these as the seven deadly sins or as themes for prime-time television. Nonetheless, you were probably taught as a child that these are bad and you shouldn't do them. For purposes of this article, do as you were taught and think bad when you commit these similar sins in the workplace.

As leaders, we are continually being introduced to new techniques and theories. Hammer & Champy's Business Process Re-engineering Model, McKinsey's 7-S Framework, and Kenichi Ohmae's 3C's Strategic Triangle are all examples of strategic models designed to help leaders think about their business in different and innovative ways. What sits on top of all of the models and frameworks, though, are a series of foundational attributes that every leader should possess if he or she is going to have demonstrated, sustained success as a leader.

In my career as a leader, I've been fortunate enough to experience a broad array of leadership situations where sometimes I enjoyed fantastic success, and at other times experienced dismal failure. In looking back at my failures, many of them had nothing to do with a theory, framework, or technology that was utilised. The failures had to do with cracks in my own foundational attributes which left me vulnerable as a leader. I've boiled these down to seven key sins which this article will focus on to help you become a more effective leader.

Ever known a manager that consistently claimed to know more than the rest of the team? How about one that was unwilling to listen to opposing views? Isn't this just a sign of confidence? What's wrong with that?

Confidence as a manager is crucial as people will look to you, particularly when things get tough. When it runs amok and turns to arrogance, the manager disrespects the team. Show respect and have confidence and you'll do fine. Subtract out respect and you're just an arrogant doofus.

Decisiveness means the manager listens to those around him or her and then makes the best decision for the project that the rest of the team can understand, and sticks to it. While team members may not agree with the decision, they should be able to see the rationale. Decisions without rationale or without listening will ultimately frustrate the team and put a target on your back.

We've all known the manager that asks for the same information multiple times, keeps the plan in their head versus writing things down, or is so frantic that they're on the verge of spontaneously combusting. Their disorganisation creates unneeded stress and frustration for the project team.

The manager needs to have a clear pathway paved for the staff to get from start to completion, and make sure the ball moves forward every day of the project. Disorganisation leads to frustration, which leads to either empathy or anarchy.

On one of my early project management jobs I was a month behind schedule on a three-month project. I refused to alter the project schedule insisting that I could "make up schedule" by cutting corners and eliminating tasks. Despite the entire project team telling me we were in deep yogurt, I stubbornly forged ahead. I ended up never seeing the end of the project because my stubbornness got me removed as the project manager. Talk about your 2x4 across the head.

The manager may believe his or her view of reality is the right way to go, but it's imperative that he or she balances their own perspective with that of the rest of the project team. Decisiveness without listening to the team leads to stubbornness.

Years back, one of my peer managers, in their zeal to "manage expectations" would consistently discuss the project in a negative light. Either the focus was on what work didn't get done, what the new issue of the week was, who wasn't doing their job. Their negative attitude about the work, people, and purpose of the project sapped the energy, enthusiasm, and passion out of the work. It was a self-fulfilling prophecy; the project failed because the project manager willed it to fail.

This one's simple; a glass-is-half-empty project manager is going to be a horrible motivator and will sap the energy from a team. This doesn't mean that you have to be a shiny-happy person all the time; but that the project manager has to truly believe in what he or she is doing and needs to positively motivate the team to get there.

Imagine this: the manager who, when pressed on a budget or schedule over-run, will blame team members, stakeholders, or anyone else that could possibly have contributed to their non-performance. Much easier to play the blame game and implicate others because everything didn't go perfectly as planned. What a weenie.

Simply put, managers that don't display necessary skills, show wisdom in their decisions, or demonstrate integrity aren't going to be trusted. For the team to truly have trust in their leader, they need to believe that the manager has the skills to manage the project, the wisdom to make sound business decisions, and the integrity to put the team's interests ahead of their own. Take any one of these attributes away, and it's just a matter of time before the manager gets voted off the island.

Lonnie Pacelli is an internationally recognised project management and leadership author and consultant with over over 20 years experience at Microsoft, Accenture and his own company, Leading on the Edge International.

How to Report Status on a Project

How to Avoid Project Burnout